What You Should Know About Distributed Control Systems (DCS) 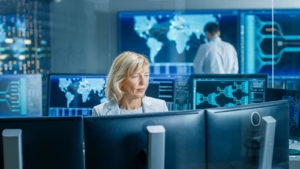 What are distributed control systems, and how do they affect the processes in your facility? They are automated systems control every process in a plant by supervising every controller in the facility. Learn more below about how DCS operate and how they help your plant function.

How Does a DCS Work?

A DCS supervises all of the functions and operations in a plant by taking in real-time data through smart devices and using the trends found in that information to make decisions about how each controller in the plant operates. Unlike a centralized control system, which uses a single controller in a central location, a DCS has a different dedicated controller for each group of machines used or operations performed. Those larger controllers manage local controllers, which are located in sections of a plant’s control area. A high-speed communication network connects all the controllers and enables them to send information back and forth so the DCS can make decisions about plant operations and performance.

A DCS is built to automate the manufacturing process by integrating advanced control strategies into its operations. It does this by arranging things as a system and distributing its control functions across a series of smaller subsystems. Some of these subsystems are semi-autonomous, and they include functions such as process control and data acquisition as well as reporting, storing, and retrieving information.

The main components of a DCS include an engineering workstation, which is the entire system’s supervisory controller; an operating station, or HMI, which is a monitoring device that operates, monitors, and controls the plant’s parameters; a process control unit, which acquires information from sensors, analyzes and processes it, and sends information out to the rest of the system; and the communication system, which connects all the other system components to each other.

The Benefits of DCS

Using a DCS allows a plant’s engineering staff to supervise and manage a larger number of control loops and other similar plant components and processes. Since distributed control systems are designed to exert supervisory control over plants’ processes, their architecture has led to improved plant efficiency rooted in improved process quality and control reliability. Instead of closely monitoring every group of machinery, the plant’s engineering staff can use the DCS to examine the different groups and manage each one’s performance. Overall, a DCS makes it easier to oversee large facilities made up of automated and semi-automated components and systems.

A DCS supervises all of the functions and operations in a plant by taking in real-time data through smart devices and using the trends found in that information to make decisions about how each controller in the plant operates.

Distributed control systems and programmable logic controllers (PLC) perform similar tasks and these two terms are often used interchangeably. However, they are different, and here is how they differ:

A PLC controls one or a few production programs, and it’s essentially an industrial computer, which is much smaller than a DCS. When a plant uses a PLC, it’s for smaller processes, like maintaining liquid across a series of tanks. A DCS contains several levels of controllers that oversee those types of processes as well as larger processes, and it makes decisions for the whole plant.

While there have been advances in PLC technology that have expanded their roles in recent years, a DCS is still a stronger option for overseeing automated and semi-automated processes in your plant.

Similarly, DCS and SCADA are industrial monitoring and control systems, but they operate differently, particularly in terms of scale. A DCS runs all of the processes and systems in a plant or another confined area in industries including oil and gas, pharmaceutical manufacturing, and chemical plants. SCADA systems run much larger geographical systems including water management systems and power transmission and distribution applications.

Additionally, DCS is process-oriented, while SCADA is data-gathering-oriented. DCS focuses on providing supervisory control systems and analyzing and processing data to make decisions. SCADA focuses on gathering data and presenting it to the operators and engineering staff. Finally, DCS employs a closed loop at its process control station and its remote terminal units, while SCADA applications do not.

DCS Solutions for Your Facility

At Hexa Engineers, we will provide your facility with the DCS solutions to improve its operations and increase its efficiency. Connect with us today to find out how we can help you improve your facility’s operations.